The completion of the major routes  and highways such as the Thika Superhighway in February 2012 has seen a tremendous increase in traffic in and out of the capital, Nairobi.This was due to the eased access to different destinations in town and thus the population saw the need  for personal vehicles leading to mushrooming of these vessels and more vehicles accessing the city. This in return, has seen heavy traffic congestion within the CBD as everyone seeks for services and goods within town.The number of Public Service Vehicle(PSV) has also increased. Also, urbanization has highly contributed to increase in the population within Nairobi County (+4.78%).
With all these factors in play, the government finds it difficult to control the traffic within our capital, leading to loss of huge amounts of revenue and income due to long hours of travel and delays in courier services.Nairobi is known for its fast-moving economy and contributes to billions of money a month to the country’s economy.This thus calls for efficient transport sector, streamlined policies governing transport within the city and government aided projects to contribute to the sector.
A recent research has shown the impacts certain routes have to the transport sector within town, taking into consideration the traffic and number of vessels using the route. The maps showed the busiest routes and best serving stations within the town for vessels moving from different sides of the county.It was also concluded that most traffic in town emanates from Mombasa Road, Lang’ata Road, Ngong Road and Thika Road. 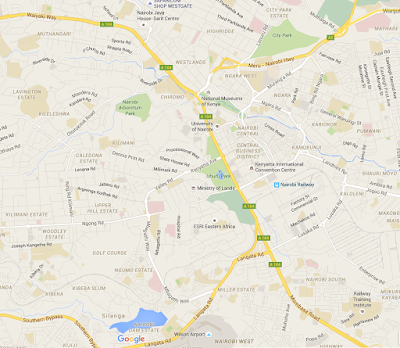 The analysis results can be found on this Portal .
There has been vigorous efforts by the government to ease traffic within our city but has not yet yielded sustainable results as each day  in town is a “nightmare” to most of the travelers.In response to this, I have decided to share some insights on ways in which traffic can be eased and help encourage sustainable growth within the CBD.
The ideas are as follows;
Implement an efficient rail system to serve the key stations within Nairobi County
This will be followed by determination of major collection points for the trains and travelers board from these points, where authorities will have control to thus reducing the number of vehicles accessing the CBD. The only solution in this is to make the train operations efficient and effective to eliminate the need for personal vehicles in town. This can be borrowed from cities such as Brussels, Mumbai and Berlin.
Another vital benefit to be achieved from such a system, is the reduction in Carbon emissions into our environment hence leading to clean air for breathing while encouraging sustainable development.
This example of remedy has already been experienced in centers like Imara Daima which serves as one of the major stations for the train operating the route.

Develop a rapid bus transit system
In Bogota, Colombia, the commuter buses have specific routes within the town and different from other road uses such as personal vehicles. A bus ferries about 50 – 100 passengers at a go and link different stations within town making it convenient for travelers and also the city council of the town as there are no traffic issues within town. This is an example of an efficient system which can have greater benefits to the economy. The big buses are fed with passengers from different points by smaller buses that do not access town. This method is achievable and of great benefit as it eases traffic when accessing town.This can also do good for Nairobi which has a similar traffic patterns in a day (its all very congested at pick hours).

Decentralize Government offices and services
Research has shown that, most of the government offices are located within Nairobi and the CBD too. The essence of these offices is to serve the general public who must access these offices physically to get the services delivered to them. This thus creates the need for most employees and citizens to access the CBD and then the hectic traffic is experienced.
The suggestion thus seeks to advocate for the relocation of such offices. This will reduce the population getting into town daily.
The examples of such a system is evident in countries like South Africa, Swaziland and Namibia where these big government houses have been located in different towns or locations to ease congestion in town.

Eliminate bus stages on major ways in the CBD
In the CBD, time is wasted mostly by big buses turning or waiting to get into a stage which is located along busy streets such as Tom Mboya street. A time the buses even utilize one lane on waiting leaving only one lane for all the other road users.This therefore causes delays in time for travel.

Encourage Cab-pooling or car-pooling
Its a common phenomena in Nairobi where two persons living in same estate and work in same office will prefer each to drive their vehicle to work instead of cost-sharing and using one vehicle.This has been one of the major contributors to heavy traffic in town.Most of the privately owned vehicles(cars) in traffic today have one or two persons on board and still competes for a space on the roads with a matatu ferrying 40 individuals. This is a concern to the traffic systems today and need to be looked into.

These were some of the ideas that can help improve traffic in our city to ensure time and resources are not wasted without greater outputs into our economy.
If you have a suggestion or comment, don’t hesitate to hit the comment box below. Chao!!

A GIS user with interests in web and desktop systems development, FOSS advocate, trainer and mentor. Lives in Nairobi but finds adventure in travelling.
The "Life in GIS" phrase is as a result of the many told and untold stories in the Geospatial realm.
Drop a message today for more details and projects!! Very good solutions indeed. As stated, for a rail system to work, it must be very efficient, in a way that it will be appealing to all walks of people that work in Nairobi, many of whom dread the current railway transport system. In terms of security, consistency, comfort and time keeping, the system has to be upgraded, it has to be spot on, just like the current Imara Daima/ Syokimau railway route.
Speaking from experience, having used the Nairobi- Ruiru railway route.

Yes indeed. Great and well-sourced ideas can change our capital from Traffic hustles

Kashi Institution main aim is contribute to the development of human resources in the form of professional of the global excellence.