Kenya has amassed a huge collection of records since 1902 when the colonial government put in place the Crown Land Ordinance of 1902. This law allowed alienation of native lands for the colonial masters and the alienation process involved formal registration of ownership rights. Over the years, a number of laws touching on land were passed and operationalized, with the effect of having land administration and registration being exercised under different legislative regimes. All the documentation produced from land transactions over these years have continued to be kept in paper form. This has seen a big number of these documents get destroyed by normal aging processes, lost through untracked paper trails and from corruption driven motives.
The Institute of Geomatics, GIS and Remote Sensing (IGGReS) of Dedan Kimathi University of Technology was one of the institutions that won the RCMRD/SERVIR EASTERN AND SOUTHERN AFRICA SMALL GRANTS PROGRAM in 2014.The project ran from October 2014 to June 2015 and the main aims of the research were the identification of the various data needs to support land administration in Kenya, identification of various workflow involved in land transactions that can be captured, and identifying those that need to be incorporated in the pilot project.
The Land Administration Domain Model (LADM) is the prevailing ISO standard on land administration and management. Through the use of this model, liaison with the NLC and other stakeholders and a team of expert developers from the Dedan Kimathi University of Technology, a pilot system was developed, tested and assessed.

The project involved wide applications of various GIS platforms ensuring all proposed sections were captured and incorporated. Below were some of the results of the project; 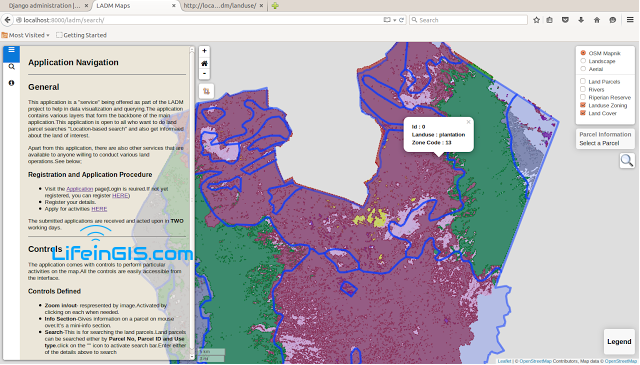 A GIS user with interests in web and desktop systems development, FOSS advocate, trainer and mentor. Lives in Nairobi but finds adventure in travelling.
The "Life in GIS" phrase is as a result of the many told and untold stories in the Geospatial realm.
Drop a message today for more details and projects!! This is very interesting and of interest to ERMIS Africa http://www.ermisafrica.org . Is the server application freely distributed? I can see you have installed in your local host.

Hello Julius.Thank you for the concern and interest.The application at the moment is still under testing and upgrade level.This will be available over the Internet soon(on a server). Plans are underway.For any info you can inbox me at swanjohi9@gmail.com and will respond to the enquiry.

What you're saying is completely true. I know that everybody must say the same thing, but I just think that you put it in a way that everyone can understand. I'm sure you'll reach so many people with what you've got to say.

Thank you all for your feedback.Am really humbled and will forge ahead to do the best.

I hope you will keep in submitting new articles or blog posts & thank you for sharing your great experience among us.